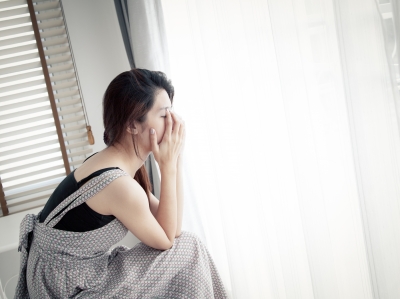 Sleep apnea affects millions of Americans and often goes undiagnosed. This is because sleep apnea has symptoms that can mimic other disorders. From headaches and fatigue to mood swings and depression, sleep apnea might be tricky to diagnose, but it’s so important that you get a proper diagnosis. Besides the common symptoms of sleep apnea, here are some of the more unexpected symptoms that could mean you have this chronic sleep disorder.

Gastroesophageal reflux disease, more commonly known as acid reflux disease, is when powerful acids from your stomach end up in your esophagus. This damaging disorder can cause traces of these acids to wind up in your mouth, causing enamel erosion and dental caries. Many people don’t realize that acid reflux could actually be a warning sign of sleep apnea, as the acids can back up in your esophagus and cause coughing which wakes you up.

If you’ve been feeling depressed or tired, it might not be what you think. You could actually be suffering from sleep apnea. Sleep apnea causes you to wake frequently during the night, and these disrupted sleep patterns could impact how serotonin works in your brain, causing you to feel depressed. The effect works two ways—decreased serotonin levels could also cause a disrupted sleep cycle!

Research indicates that people who have sleep apnea get diagnosed with cognitive disorders an average of ten years earlier than people who don’t have the disorder. Experts speculate that this is the result of a lack of oxygen in the blood, which means the brain can’t properly remove toxins or store memories. The effects may be memory loss or worse—early dementia or Alzheimer’s.

Sleep hugely impacts your mood, research shows. When you get only a few hours of sleep every night, anxiety, stress, agitation, and more mood swings can become part of your daily life. If you’ve been seeing a dramatic change in your moods but are still getting that 8 hours every night, talk to your dentist, who can refer you to a sleep specialist. You could be waking up every few minutes and not know it!

People with sleep apnea often experience a decreased sex drive or erectile dysfunction. This can be the result of a lack of deep sleep, which can negatively impact testosterone levels. Testosterone plays an important role in sex drive for both men and women. This is one symptom of sleep apnea that’s commonly overlooked, as people can be hesitant to talk about this with their physicians.

If you’re experiencing any of these symptoms, schedule a consultation with either your dentist or a sleep specialist. Your dentist can talk with you about your symptoms and perform and oral exam that’ll reveal the state of your oral health. Acid reflux has a huge impact on dental enamel, so you may need treatment for this along with sleep apnea. Sleep apnea is considered a chronic disorder that can severely impact your health—don’t wait to seek a diagnosis or get treatment!

Image courtesy of FrameAngel at freedigitalphotos.net

Article Name
Unexpected Signs That You May Have Sleep Apnea
Description
Sleep apnea affects millions of Americans and often goes undiagnosed. Besides the common symptoms of sleep apnea, here are some of the more unexpected symptoms that could mean you have this chronic sleep disorder.
Author
Dr. Thomas Bucker

What to Expect During Laser Teeth Whitening